72 Years Later, Holocaust Survivors Who Were IN THE SAME LINE Meet Again 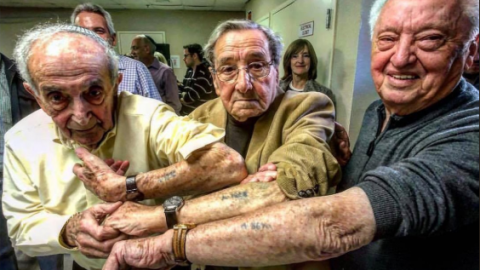 On May 1, the world celebrated Yom Hashoah – The Holocaust Remembrance Day. Each year, the solemnities start off with six Holocaust survivors lighting torches in remembrance of the six million murdered. This is followed by the sounding of sirens which would bring the nation of Israel to a standstill.

“The Holocaust, which established the standard for absolute evil, is the universal heritage of all civilized people.” – Our Living Legacy

The Holocaust was the pure embodiment of human suffering, that ghastly reminder of the unimaginable evils that a human can do to his fellow being.  As such, there are numerous continuing efforts to keep the memory of the fallen alive, including a recent undertaking that put millions of German Holocaust documents online, courtesy of the Arolsen Archives.

The rich trove of documents include the names of over 2 million people, the concentration camps they were placed in, and – for those who were mercilessly murdered – death reports. It also includes the testimony of some survivors.

Speaking of postwar Holocaust testimony, the documentary journalist Sandi Bachom had recently gathered two survivors for an interview. But this gathering was anything but ordinary: Both men were in the same line during the concentration camp marking process that stripped them off of their identities, reduced into mere numbers.

And they met for the first time in 72 years.

Today is #YomHaShoah #HolocaustRemembranceDay. In 1944, the year I was born, my friends Werner and Walter were tattooed 10 numbers apart in #Auschwitz. Because of a Facebook miracle I was able to film their first meeting 72 years later. #NeverAgain pic.twitter.com/GF7Dq8v1OJ

Here, Walter Spier and Werner Reich shared their harrowing ordeals. The most heartbreaking part, however, might be the shocking stigma that Werner had suffered when he came back home to Yugoslavia.

And the stigma he had experienced back them might have morphed into an appalling trend that engulfs much of Europe today: The sharp re-emergence of anti-Semitism. Last year, the European Union Agency for Fundamental Rights polled more than 16,000 Jews, and it yielded results that seem to harken back to Hitler’s regime – Eighty-five percent thought anti-Semitism is the biggest social ill of the respondents’ respective countries, a result that might be gleaned from the steady increase in assaults against our Jewish brethren, incidents of hate speech and in the desecration of their synagogues. They fear that this will be the new normal. Any nation with a keen sense of history would readily condemn such bigotry, lest it will be the new epidemic. Silent, but equally deadly.

This is a short video; nonetheless, it is an excellent depiction of the worst atrocity ever committed. Let us never forget.