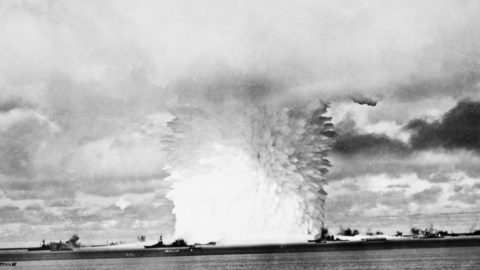 As an added bonus to the amazing gifs we found of this weapon, we’ve also included some great facts that most people don’t know. Share this post with your friends so they can get in on it too. Some of the factoids are downright scary.

Suspecting that Nazi Germany was trying to build a weapon of mass destruction, the United States, United Kingdom and Canada worked together during World War II on what is called the Manhattan Project. Discovering nuclear fission, this collaboration led to the construction of the first nuclear bomb.

Not all bombs are created equal. This holds especially true for any type of nuclear bomb. Here’s some perspective on the energy emitted from a thermonuclear bomb. You don’t have to have any knowledge of weapons systems nor a physics degree to understand this. One of these bombs weighing less than 2,500 pounds has the explosive force of 1.2 million tons of TNT. A bomb no bigger than a conventional one can destroy and entire city.

All sorts of tests were conducted to see the effects of nuclear blasts. Operation Crossroads which was conducted by the United States in 1946 was a way for the brass to test free fall air drops as well as underwater explosions. As you can see in the gif above, the explosion could potentially wipe out an entire navy if dropped in the right place.

Operation Crossroads was broken down into three separate tests. Named Able, Baker and Charlie (which was eventually canceled), they were testing nuclear blasts on ships. During Test Baker pictured above, the blast sunk a total of 10 ships. The ship closes to the blast was vaporized, as the test crew were unable to find a single part of it.

5. Nukes Were Also Detonated Under Ground

Underground testing began in 1951. What you see above are the effects of such a blast. When buried at a sufficient depth, the effects of contamination are greatly reduced. The crater which you see above is created when the rocks closest to the bomb vaporize, and the entire surface caves in.

4. The Sheer Amount Of Them

You can research this yourself, as you might not believe us when you read the number. Around the world, there are a total of 16,000 nuclear weapons stored at various facilities and they can be used at a moment’s notice. They’re spread around 14 countries and can reach any target around the world. Let that sink in.

Since their inception, many countries around the word have experimented and tested nuclear weapons. The total of known test blasts is 2120. Almost half of them were performed by the United States. The second nation with the most is the USSR with 727. That’s a lot of contamination around the globe if you think about it.

2. Most Powerful Nuclear Blast Ever

This award goes to Russia (former Soviet Union.) On October 30th, 1961, they released the Tsar Bomba. As its name would suggest, it was the king of all other bombs. Let us put it this way. The biggest bomb the U.S. tested had a 15 megaton yield. Russia’s second to biggest bomb yielded 24.2 megatons. The Tsar? 50 megatons.

The biggest real “tests” with nuclear weapons were conducted on Japan during World War II. Dropped on Hiroshima and Nagasaki, the world saw firsthand what just these two of these bombs can do and their lasting effects as well. Things have changed since then however. With 16,000 nuclear bombs laying around the world, the next time we use them will most likely be our last.