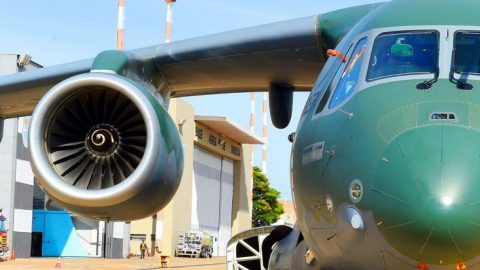 The ability to multitask is a valuable skill no matter where in the world you go. The Embraer KC-390 has been in development for some time now, but that’s because it had a lot of functions to perfect. Now the KC-390 is ready to roll as an innovative multi-functional military transport that could have a place in many air forces.

While jets like the F-35 aim to do every type of combat mission the Embraer KC-390 is the Military Transport that can do just about everything except fight. It has a large cargo hold that can be utilized for dropping paratroopers, the inside is also fully functional as a medical station and it even has the ability to take off from short airfield as well as rough terrain.

“They are bringing to the market a new concept. It is a totally multi-mission conceived and engineered with the state of the art technology. Not only in terms of avionics but in terms of the cockpit, all the devices. It can provide search and rescue, fire combat, refueling not only for jets but for choppers as well. Medical evacuation, paratroops, cargo transport.”

The KC-390 is a real game changer in the field of military transport due to its extreme versatility. Honestly, an aircraft like this could fit in just about everywhere. Check it out the Embraer KC-390 make its Paris Airshow debut in this clip to see everything that it can do.﻿