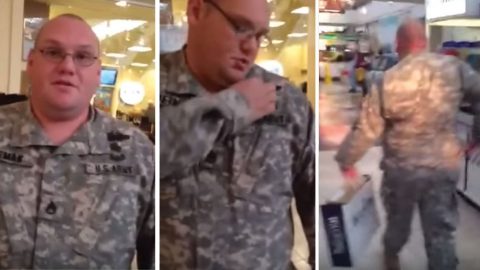 Ever since the Stolen Valor Act was made law in 2013, the internet exploded with active duty military personnel and veterans capturing fake military guys prancing around asking for free stuff. It still happens now despite the law, but at least there are repercussions, even if just embarrassment online.

The full title of the law is “to amend title 18, United States Code, with respect to fraudulent representations about having received military decorations or medals.

One such case, which was perfect in a sense, happened in a mall a few years ago and has since gotten millions of views all over social media. A man we won’t name (although his name has been out there for some time) was walking in a mall with a military uniform. A Ranger’s uniform to be exact.

If you know anything about the military, you know that Ranger school is incredibly selective and only the cream of the crop make it through the rigorous training. Keeping that in mind, just the pure physique of the man already screamed “stolen valor.”

Having spotted this from a mile away, a real, active Ranger used his son as a decoy to lure the faker into camera view. He then asked him what he does in the military and the guy let loose. He started telling all sorts of stories with a big smile, giving the real Ranger more ammo for his next line of questioning.

The active Ranger literally tears him apart after that, but we won’t go into detail here. You can watch it for yourself in the video below. Not that we like to see someone get embarrassed, but this guy deserved ti.