How He Turned A Single Rivet Into A Full Spitfire 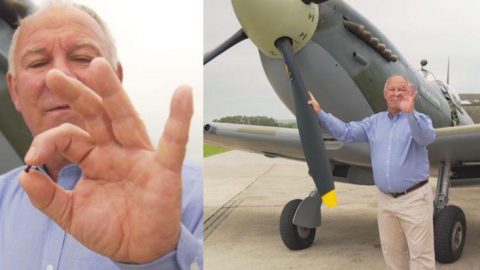 It is fair to say that the Battle of Britain would have had a drastically different outcome if not for the Supermarine Spitfire. This ferocious fighter earned a devout following for driving off the forces of the German Luftwaffe and helping to win WWII. Generations of British children spend their youth building models of the Spitfire, but one man took it much farther in the ultimate passion project.

Martin Phillips owns a tool shop in the United Kingdom and is a lifelong admirer of the Spitfire. On his 40th birthday, he was given a single rivet from a Supermarine Spitfire and challenged himself to finish the job. For the next 14 years, Phillips searched the British countryside for the pieces assembling them one by one until the plane began to take form.

“I never thought that over a period of 14 years that I would probably wear three cars out with mileage along the journey to provide all the parts that you see today.” Sadly Martin can’t fly the Spitfire that he has devoted so much time to building, but he is learning. In the meantime, he is happy to let other Spitfire pilots enjoy the fruits of his labor. Check out the Spitfire in this video, proof of what 14 years can do in the ultimate do it yourself project.