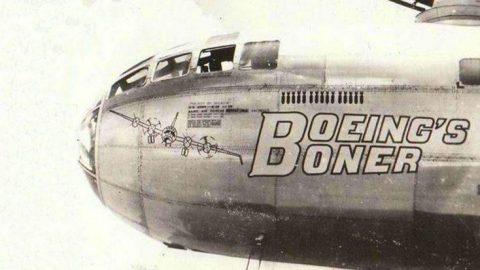 Nose art is just a whole lot of fun and it helps to add character to a plane, some think it is just graffiti but it has a deep significance in WWII history. Nose art has its origins in WWI when German Pilots began to paint mouths under their planes used to identify friendly planes during combat, but it soon took on a life of its own. Arguably the most iconic nose art belongs to the Flying Tigers with the shark teeth painted on their P-40 Warhawks. The Flying Tigers became so famous that the Walt Disney Company designed a logo for their group. Disney would go on to hundreds of logos, but they had a tendency to stay away from sketchy nose art to preserve the integrity of their company. Artists who painted nose art were in high demand during WWII and officials turned a blind eye to the images of naked women and racial stereotypes because they boosted morale among airmen. However, nose art was not allowed on US naval aircraft. “Nose art was a morale booster, and those in daily combat needed that boost. Facing the prospect of death on every flight, the crew deserved all of the encouragement, and smiles, available to them. The art on the plane unified the crew, and identified it, and made it unique from all of the aircraft in their unit or on their base.” The B-24 Liberator is among the most popular bombers of WWII and they featured some of the best nose art around. In this video, you can see historic photos in full color of some of the best B-24 nose art from WWII.