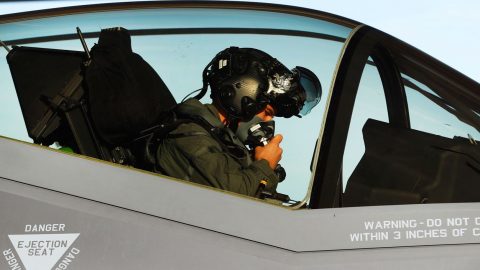 F-35 Lightning IIs are getting a bad rap these days. Although decades ahead of other platforms (and we only know a few of its features as there are many that are classified), malfunctions are common.

Since May, five pilots experienced oxygen problems as their masks weren’t feeding them enough. They experienced hypoxia, meaning, their cells weren’t getting enough oxygen during high altitude flights. Luckily, their backup systems worked and the pilots avoided deadly symptoms which include disorientation, loss of consciousness and even death.

The main problem is still there, however. For now, the 55 F-35s stationed at Luke’s air force base have been grounded until Lockheed figures out the problem. The following statement about the incidents was released on Twitter.

We need to cut this plane a break though. It’s the most advanced jet fighter ever made, so it’s understandable that systems will have all kinds of kinks to be ironed out. Every single plane in history went through teething problems, even the most known planes like the F-4 Phantom, B-2 Spirit and many others. We just don’t remember the headlines from those days. Rome wasn’t built in a day, and neither will this jet.