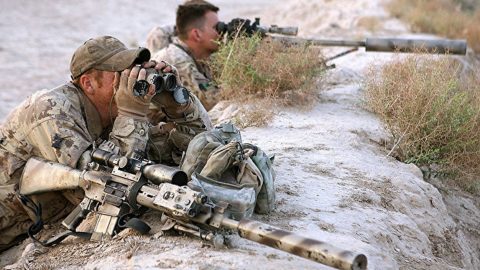 Snipers are a different breed of soldier. Not to take anything away from any other branch or specialty, but being able to wait in one spot for hours on end in a cold swamp to take the perfect shot for example, is something not many sign up for. Plus, there is the skill of actually hitting your target from afar.

Before this current shot, the world record for the longest distance a sniper shot was made was held by a British sniper by the name of Craig Harrison. Back in 2009, he picked off a Taliban gunner from a distance of 2,475 meters which translates to 1.6 miles. This incredible shot held the record for longest sniper kill for 8 years but was just now broken. Well, rather shattered.

“The bad guys (Islamic State) didn’t have a clue what was happening.”-Military source

A Canadian special forces sniper team (shooter and observer) were working on a classified operation in Iraq over the past month. Seeing a Daesh attack on Iraqi forces, they took a shot from 3,450 meters. That’s 2.14 miles and they scored a hit.

Both their unit and their names have been kept from the media to protect them and the operation as a whole, but military sources say that the shot was documented both by a camera and other data.  The only concrete data the media knows is that the 2.14 mile shot took 10 seconds to reach its target from the time it was fired.

We’ll keep you updated on this incident as new facts unfold. We’re sure the footage will come out really soon.