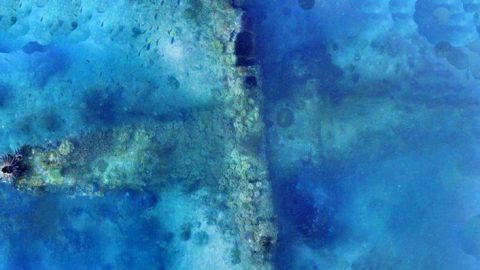 The Pacific Theater of War went through an unheard of amount of carnage and destruction. Needless to say, not everyone made it out alive during this fierce fighting especially for combat pilots on the front lines. Countless planes were shot down in the fighting with many of them unrecovered to this day. But thanks to a new program called Project Recover is working to located downed planes and recently discovered a pair of B-25 Mitchells.

Off the coast of Papua New Guinea, the remains of two B-25 Mitchell bombers were found on the seabed encrusted with marine life. At first sight, these may just look like coral reefs but upon closer inspection they clearly warbirds that met an unfortunate demise during WWII.

“People have this mental image of an airplane resting intact on the sea floor, but the reality is that most planes were often already damaged before crashing, or broke up upon impact. And, after soaking in the sea for decades, they are often unrecognizable to the untrained eye, often covered in corals and other sea life.”

The planes were known to locals for some time and word spread to Project Recover which is undergoing efforts to document these aircraft. The film of the expedition to find inspect the B-25 Mitchell bombers can be viewed in this clip.