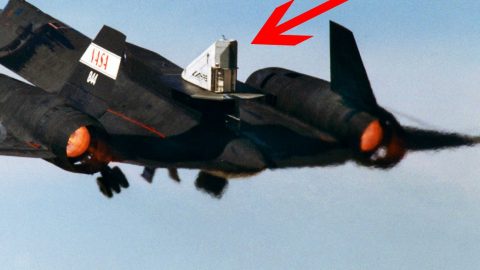 Here’s Something Not Many People Know.

To be perfectly honest we didn’t know about this experiment. Not only are we big aviation enthusiasts, we’ve also started this blog and researched literally thousands of cool facts over the years. Still, we had no idea this was even a thing until we found this video. Then, we started digging some more.

We actually feel stupid not only for not knowing this but also because when we read up on this whole ordeal, we still don’t fully get it. We’ll try to explain it as best we can in layman’s terms but if you’d like to read NASA’s files, we’ve included the link to their page below.

If you’d like to read up on all the interesting facts about this experiment, go to NASA’s page here.

So here we go trying to explain what this is with our tiny little brains. LARSE was NASA’s Linear Aerospike SR-71 Experiment that took place from 1997 to 1998. It was meant to provide data regarding “the aerodynamic performance of the Lockheed Martin X-33 lifting body and linear aerospike engine combination and to lay groundwork for a future reusable launch vehicle.”

The X-33 was an unmanned spaceplane developed by the U.S. government in the early 90s. Part of the Space Launch Initiative program, they wanted to develop a next-generation, reusable launch vehicle. The project cost about 922 million and was canceled due to too many technical difficulties.