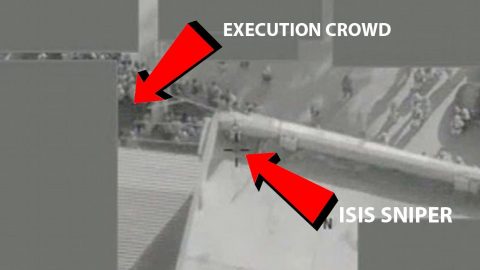 On September 20th, 2017, the Royal Air Force released footage of their operation in Syria which stopped the killing of two men.

According to Britain’s Ministry of Defense, a Reaper drone was closely watching commotion in the town of Abu Kamal which is controlled by ISIS. Seeing and then confirming that the two handcuffed men were ISIS’ prisoners, they asked for an airstrike.

As part of their ongoing terror tactics, ISIS members also rounded up the locals at gunpoint to watch the brutal execution. If they refused, they’d either be shot or forced to join the two men in handcuffs.

“The individual whom we engaged was a sniper in over-watch to shoot civilians who sought to move away from the execution, let alone to protect the planned execution itself….That particular example for us very much brought it home because civilians had been herded in, forced literally at gunpoint, to go and watch this going on in their hundreds.”- Air Commodore Johnny Stringer | Commander of UK Air Operations

To make sure things are going smoothly and looking ahead for possible threats, ISIS also posted a sniper on the roof of the building to overwatch. That was a good move, as a drone wouldn’t be able to fire a missile in such close proximity to the innocents who were rounded up. The sniper, however, was further away and fair game.

Shooting a Hellfire at his position, the sniper didn’t even know what hit him. Upon explosion, the crowd dispersed and members of ISIS can also be seen fleeing the scene.