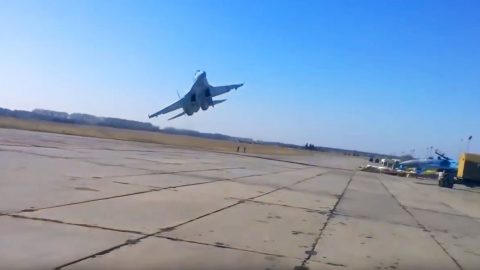 We figured that if anyone of you has a Sukhoi aircraft somewhere in your backyard, you probably shouldn’t do what the pilot in this video did. You know, just in case you do.

We’re not pilots but have been doing this for a bunch of years now (this makes us the Chair Force, right?), but it looks like he almost stalled right when he took off. Just look at the footage. The Su-27 took off in the distance and it took it a little while to come into the frame. There are actually a couple of people standing there on the field. Keep an eye out for the guy farthest to the left.

The fighter took off and made a sharp left bank and judging by the way the right wing dipped and the angle of attack increased, this guy was about to lose all his energy and hit the ground. Tell us if we’re wrong. Seriously, our expertise is limited but that’s what it looked like.

Then there’s that poor dude in the video. Since the plane sort of wobbled for a second there, it must have been hard to gauge exactly where this plane would go down if it actually did. He goes right for a bit, then changes his mind and books it left before finally hitting the ground when it was directly over him.

Can’t imagine what was going through his head.