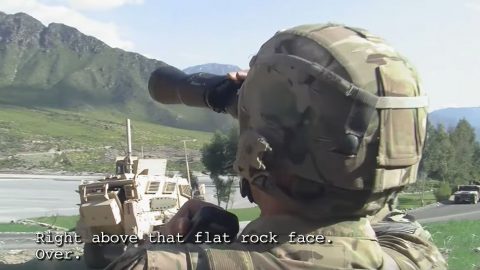 Firing at a convoy of American soldiers from a hilltop might sound like a good idea. The fire can be coming from anywhere when you’re being shot at and as a sniper, you have a wide area to conceal yourself with.

But that’s not the way it typically plays out. Once spotted, you’re as good as dead. Especially if an F-15 is nearby and more than willing to provide some close air support.

Top Youtube comment for this video: This is like one of those shooters where one group plays the free trial and the other group all has premium memberships.﻿-BaileysBeads

In this video, you’ll see a group of soldiers from an AHC special. While filming, they got hit by fire from the hill you’ll see in the video, and as always, took care of business.

We won’t get into much detail about this video here, as you should just watch it for yourself. It’s a good testament to U.S. readiness and equipment.