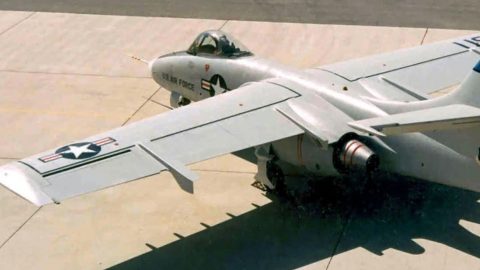 The A-10 Thunderbolt II, also known as Warthog, needs no formal introduction. Arguably the best CAS (Close Air Support) platform ever built, its legendary gun is the last thing many enemies heard. Before all that however, its prototype had to go through a competition like every other model of aircraft come out on top. This is what you now know as the A-10 had to stand against.

The Vietnam War clearly showed both the Air Force and all the military forces on the ground that the United States was lacking a solid CAS platform. Using F-100 Super Sabres and F-105 Thunderchiefs for the role, many got shot down with mere small arms fire.

The people sent in to rescue grunts ended up having to be rescued themselves if they survived. A new proposal was needed.

In 1970, The USAF issued another proposal for a ground attack aircraft that met the following criteria:

Sound familiar? It should, as the A-10 excels at all of these and then some.

Six companies set out to try and make a plane to these specifications, however, only two survived the first cut. Fairchild Republic’s YA-10A and Northrop’s YA-9A.

Its construction was very similar to the A-10. Most notably, it was fitted with a bathtub to protect the pilot from small arms fire at low altitudes and it also had a dual redundant flight control system in case hydraulics were knocked out.

Although the external appearance of the planes differed, the GAU-8 was to be placed in the same place as in Fairchild Republic’s prototype; in the belly of the plane with the barrels extending out of the nose.

The YA-9 first took off in May of 1972, with the official fly-off comparing the two aircraft taking place in October and December of that year. Both of the prototypes met the Air Force’s requirements, but it was Fairchild Republic’s design that walked away with the contract for no specific reason we could find. (Maybe it looked cooler)

We also found the first flight of this plane on Youtube, so check it out. It’s pretty neat to see it fly.