YF-23 Declassified – How Its Stealth Surpassed The F-22 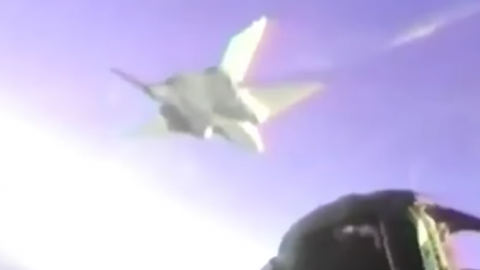 It was a beautiful fighter jet that never got the chance shine the Northrop Grumman YF-23 Black Widow II. While most people know the story of the YF-23 in its heated competition against the jet that would eventually become the F-22. However, not many people out there are familiar with what the YF-23 was truly capable of doing in combat missions including invisibility.

In the early 1990s, the United States Air Force was coming to a final decision about the Advanced Tactical Fighter (ATF) competition between the Lockheed YF-22 and the Northrop/McDonnell Douglas YF-23. Although the Air Force chose the YF-22 many experts still considered the YF-23 to be the superior fighter jet. Many think that the YF-22 was chosen simply because the Air Force was upset with Northrop due to overrun costs from development the B-2 Spirit and that Lockheed would be a better fit for managing the ATF projects.

The YF-23 had better maneuverability and better range than the YF-22 which allow it to take the fight to hostile locations. Its engines were also spread out in a way to reduce radar detection and the windscreen was highly reflective in radar allowing it to remain stealthier in flight. Essentially it was an invisible jet that exceeded the capabilities of the YF-22 but never got the opportunity to serve.

“The final operational version of the F-23 would have offered much better range than the Raptor—especially at supersonic speeds—especially if powered by the YF120. That would have come in handy over the Pacific. It would also have been stealthier and it would have been almost as maneuverable as the Raptor—or possibly more so at different speeds and altitudes.”

The following clip contains some of the rare footage of the YF-23 in action.