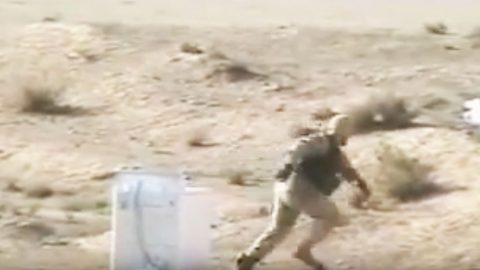 As any person who has served in any armed forces, what you see on T.V. is not what happens when you actually join. There’s a slim chance you’ll be given state of the art gear and weaponry and sent on a top-secret mission to take out a high-value target. The reality is that you’ll be mopping a wet deck or sweeping sand into more sand. (We’re not trying to put down any service members, of course.)

Truth of the matter is that you might have a lot of downtime and you have to fill it up by getting creative. We’re not sure how these soldiers found a washing machine in the middle of the desert, but they did. On that note, what better way to fill up the time to see what a grenade would do to it.

Their choice of grenade was of course, the widely used M69. Developed in 1968, this fragmentation hand grenade is used to this day. It’s seen action in the Vietnam War, Falklands War, Persian Gulf War, War in Afghanistan and in Iraq.

The entire thing weighs just 14 oz and is composed of composition B explosive. That’s a mixture of RDS and TNT which spreads the fragments of the outer shell up to 50 feet.

The one thing we skipped telling you is that the fuse of the grenade gives one about 4 seconds to clear the area. This is why these things are thrown. Dropping in in place and running away is risky to say the least, but hey, at least we now know what washing machines are made of.