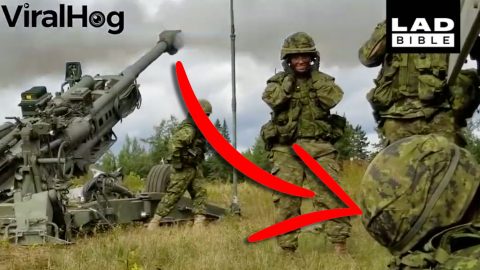 LADbibble, an aggregator of viral videos and stories, just got their hands on this military video called “Waking Private Ryan”  and it’s going wild on the internet. Uploaded on April 9th, 2019, it got almost 20 thousand likes, 6 thousand shares and it’s been viewed 1.3 million times in under 24 hours.  Now that’s some social proof.

One of their members took a little mid-day nap and as you can imagine, a discussion must have been had. “What do we do to him? How do we wake him up? Wait, are we having artillery practice right now?”

As you can imagine, they all probably stayed as quiet as possible and silently loaded their Howitzer only to make it the ultimate alarm clock when they fired it. Not before making sure everything was documented, of course. One of his buddies posted up right next to him to make sure he got the initial reaction, and a reaction he got.

Watch the video of the whole thing unfolding below. It’s absolutely hilarious.