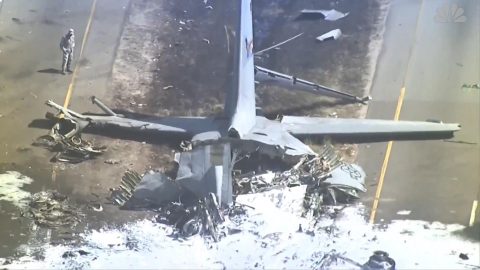 On May 2nd, 2018, a C-130 operated by the Puerto Rico National Guard crashed right after takeoff while leaving the Savannah/Hilton Head International Airport. It was the aircraft’s last flight as it was headed to Arizona to be retired but as witnesses stated, “it just fell out of the sky” right into the median of local Highway 21 in Georgia.

It’s been six months since this crash that claimed a total of nine lives aboard the aircraft (no one was killed or hurt on the ground) and the Air Force just released the cause of the crash. As a summation, the Air Mobility Command stated they’re having morale, manning and resource problems which pointed to a “culture of complacency.”

The report stated Maj. José R. Román Rosado was an experienced pilot flying for almost 14 years and accruing 3,500 flight hours but it was a series of compiling mistakes that lead to the crash. Rosado’s handling of the culmination of those mistakes, however, was what eventually lead to the crash.

When the WC-130 was fired up, engine 1 was underperforming, which was not noticed until after takeoff. At that point, the flight should have already been aborted to find the root of the problem.

Once airborne, the crew failed to “perform the Takeoff Continued After Engine Failure procedure or the Engine Shutdown procedure, nor did they complete the After Takeoff checklist,” something that should have been done to start correcting the initial problem.

The ultimate cause of the crash was Rosado applying left bank and rudder as opposed to maneuvering toward the functioning engine. By doing so, the pilot stalled the left wing at an altitude of 900 feet which was too low to allow the crew to regain control of the aircraft.

You can find footage of that happening below. Also, if you’d like to read the full government report, you can do so here.