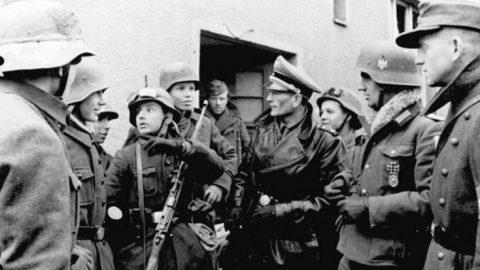 As Nazi Germany began to fall, the Allied Forces knew that some sort of system would need to be established in order to prevent chaos. So the Allies decided to bring in German citizens loyal to their cause to maintain order. However, not every German citizen agreed with their new occupation and felt even more betrayed by Germans who dealt with them.

After the Allies seized control of Aachen, Germany they sought to install a leader who did not sympathize with the Nazis. A lawyer named Franz Oppenhoff was selected as the new mayor by the Allied Forces. Oppenhoff took office in October of 1944, but when into hiding soon after. In the end, the may as well have just painted a bullseye on his head.

The leadership of Nazi Germany felt betrayed by Oppenhoff and Heinrich Himmler ordered a team of assassins to have him eliminated. This elite team was known as the Werewolves consisted of two SS officers and for Nazi youth members. The group traveled in a captured B-17 before being dropped off in a Belgian forest, making their way to Oppenhoff’s location.

They found Mayor Franz Oppenhoff at a party near his home and the team prevented to be downed German pilots. Oppenhoff urged them to surrender to the Americans in order maintain their safety. Unfortunately, this would be Oppenhoff’s final act of kindness which was returned with a bullet to the head.

The Smithsonian Channel goes into deeper detail about the assassins of the German resistance in this clip.