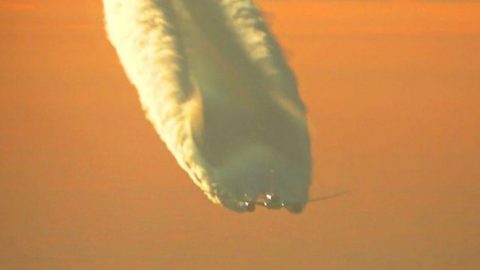 Out Of Thin Air.

Have you ever looked up at the sky to see a plane creating a long cloud streak? That is a contrail, although there are a bunch of nutjobs out there who call them “chemtrails.” So what are they and how are they formed?

It all has to do with physics because there isn’t anything chemical about them, they are just formed by water vapor freezing around particles. There are two different kinds of contrails produced by aircraft which are aerodynamic and exhaust.

Aerodynamic contrails are formed when air moves over an airfoil and decreases in pressure if the air has higher humidity it is more likely that a contrail will form. The air goes from ambient, to cooler and back to ambient producing vapor sort of like steam and fades away quickly because it has returned to normal temperature.

Exhaust contrails are formed from the heat produced by an engine usually at high altitude where the ambient temperature is much colder. The hot air mixes with the cold air but doesn’t warm back up to ambient temperature so the contrail lingers in the air for a longer period of time.

So, in the end, they aren’t a Government conspiracy to control your minds, they are just cold clouds. So now that you know how they work check out this beautiful video of an airliner as it forms exhaust contrails at a high altitude.