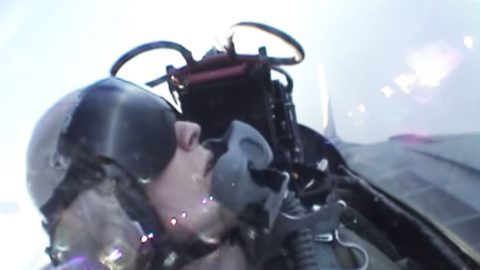 F-14 Tomcats were a modern marvel when they were first introduced in 1974. Made specifically for the United States Navy, they were designed to combat Russian jets aviators encountered during the Vietnam War.

They were the first to have a twin tail and also incorporated a swept-wing design for storage on carrier decks. Over 700 of them were built until 1991 and they were retired in 2006 after being replaced by F-18 Hornets.

As their primary place of residence were carriers, the footage below will show you the operations they carried out during conflicts. The guy behind the YouTube channel Tomcat Cockpit POV took it upon himself to digitize a lot of VHS footage so we can view it on the internet, and although still slightly grainy, it’s some of the best Tomcat carrier ops footage you can find.

Catching a glimpse of a tail code on one of the Tomcats about to depart, the NG designation indicates the aircraft were attached to Carrier Air Wing Nine and took off from USS John C. Stennis (CVN-74). This carrier was commissioned in 1995 and is a forward deployed in the Pacific Ocean.