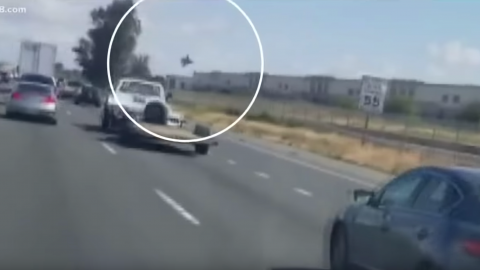 An F-16 fighter jet crashed into a warehouse in Riverside, Calif. The incident occurred near March Air Reserve base around 3:45pm Thursday, where the pilot was able to eject before impact and avoided any serious injuries. He was transferred to a hospital for further evaluation. 12 people were triaged for exposure from debris of the impact.

Warehouse worker Balder Castro describes the event in the video below describes what he thought was the sound barrier being broken, when in fact, it was the building collapsing on itself. The crash also started a small fire inside the building.

According to the base commander, the F-16 pilot was conducting training exercises when something (obviously) went wrong and was forced to eject. Military officials are still investigating as to what exactly happened.