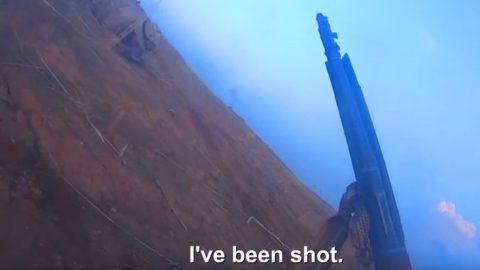 For years the terrorist organization ISIS has painted themselves as an undying force to be reckoned with as they battle the forces of the United States. However, the public image of ISIS is often depicted through their propaganda which only shows their successes. In actuality, ISIS is not as successful as they portray themselves to be and some recent film offers proof.

ISIS soldiers on the front lines of combat really are not as a hyped up as they claimed to be. Propaganda films from ISIS depict quick and decisive victories over their enemies and advancing through captured cities, however, this is a vast exaggeration of the truth. Film recovered from the body camera reveals the truth of ISIS militants in combat.

As the ISIS militants move to confront Kurdish Peshmerga troops in Northern Iraq you see exactly how disorganized they are. They approach their enemies without plan or action, they are seriously outgunned using old rifles and they are seen scrambling to reload weapons and can’t even do it properly. Honestly, they spend more time bickering with each other than fighting, if you can call it fighting. So check out this clip from the ISIS attack and you see that they have a lot to work on before they actually be called terrorists.