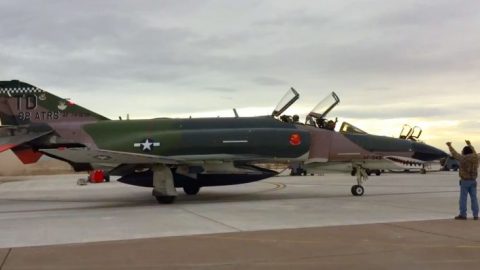 The F-4 Phantom knew its fate but that doesn’t make saying goodbye any easier. After 53 years the fighter that won the hearts of so pilots and aviation fans around the world made its final flight.

The F-4 has been retired from combat service in the United States since 1996 and a few of them survived in museums as well as making appearances in air shows. Over 300 F-4 Phantoms were converted into drones known as “QF-4s” to be used as target practice for modern fighters. The use of F-4 Phantoms as target practice caused a public outcry, but those within the QF-4 Program justified their use for providing a realistic air-to-air combat scenario for pilots.

The retirement ceremony for the F-4 was intended to be private but due to the massive interest, they opened their doors to the public. Colonel Ron “Elvis” King has been the face of the QF-4 program was present to lead these fighters into the sky one last time for its devoted fans.

“Four Phantoms took to the skies and individually beat up the field before forming a four-ship “Phinale”, followed by a fighter break for landing. They received a traditional fire hose salute from the locally based emergency vehicles sending a plume of water into the air as the retiring fighters taxied slowly by, their drag ‘chutes still fluttering.”

Many of the attendees came up afterward to bear their signatures on the F-4 Phantom, the jet that means so much to them. After 53 years the F-4 Phantom ends its service in the bittersweet ceremony flying through an overcast sky. The Phantom “Phinale” ceremony can be viewed in this clip.