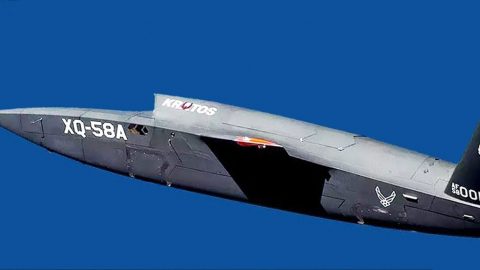 The flight test of the @usairforce XQ58-A Valkyrie, a jet-powered drone, is a major step forward for an experimental "loyal wingman" concept that envisions small robotic drones accompanying fighter jets into combat, scout ahead or absorb enemy fire. https://t.co/IIyytaPrlA

The concept of this project is to provide human pilots with “loyal wingmen.” When going into enemy territory and faced with either ground or air adversaries, these autonomous aircraft would scout ahead of their human counterparts to look for threats, relay information and even absorb enemy fire when necessary.

The drone is built by a San Diego defense and security company called Kratos. Although the Valkyrie is yet to be proven and accepted by any branch of the military, their other product, the AN/SEQ-3 Laser Weapon System, was already a hit and is being tested with the United States Navy with great effect.

As for the XQ-58A, here are its specifications the public is allowed to know about:

We’ve provided the first official test flight of the drone below. It was uploaded by the Air Force Research Lab to YouTube.