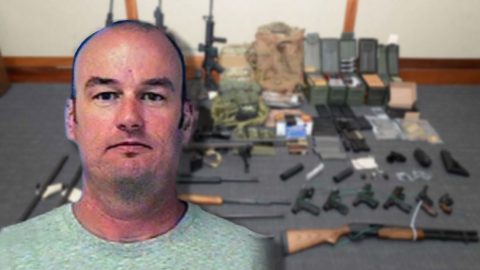 On February 20th, 2019, Lt. Christopher Paul Hasson of the United States Coast Guard stood in front of the court as charges of domestic terrorism were read against him. Arrested on Friday the previous week, Washington D.C. prosecutors presented their filings listing illegal weapons and drug possession as some of the crimes.

“The defendant is a domestic terrorist, bent on committing acts dangerous to human life that are intended to affect government conduct.” – Court Filing

The above-listed charges are just a small part of a much larger case. After his arrest, files on his home computer revealed a plan to attack U.S. citizens with the aim to disrupt life as we know it. From a biological attack to get things started and with plans to contaminate the food supply, Hansson also collected 15 firearms with over 1,000 rounds of ammunition. He told coworkers he was going to snipe high ranking officials in the government, the police finding a spreadsheet with the names of those chosen.

The plan seems to be political and racial in nature. Court documents state his “hit list” included politicians and journalists with the end goal of creating a “white homeland.” His extremist views could be found in his manifestos on his computer as well as word of mouth from those who knew him. In an e-mail draft, he wrote, “Much blood will have to be spilled to get whitey off the couch. … They will die as will the traitors who actively work toward our demise.”

We’ll follow this case closely to bring you the latest updates.