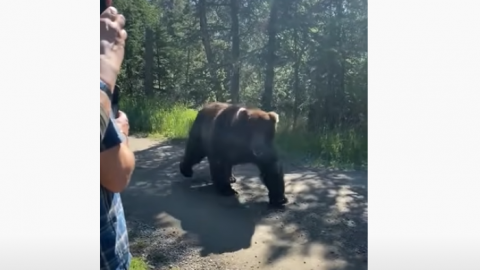 A massive grizzly bear was spotted by tourists in Alaska’s Katmai National Park. The bear casually walks by past a group of people, stops to read a sign with what looks like his photo on it, then strolls back and leaves. The man in the viral video did the right thing by speaking in a calm and monotone voice.

Katmai National Park is a well-known brown bear viewing destination. It’s estimated that there are more than 2,000 of them roaming the park. One of the oldest brown bears in the area Bear 480 Otis, who is thought to be around 25 years old. He was missing for a bit but was spotted once again.