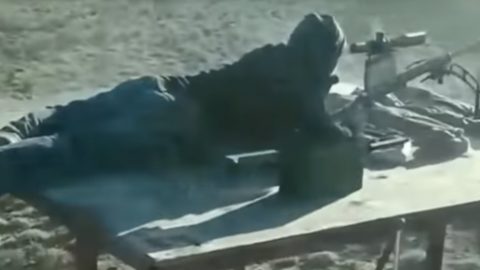 Bill Poor Is An Incredible Marksman

It’s a big deal to hit a target from 3 miles away. When you’re looking at something that far, you have to realize that the earth is actually curving. A clear shot is just about impossible.

But that didn’t stop Bill Poor from Tuskola, Texas when he set out to claim the 3 mile record-shattering shot on January 14th, 2018. With him, he had his custom rifle by Vestal’s Custom Rifles chambered in .408 CheyTac and some 390-grain bullets.

The target was 53 inches wide, but at 3 miles away, it was hardly even visible. Poor had to account for friction and gravity, pointing his rifle a few degrees higher than the target. Wind, humidity, and temperature were also on his mind as he dialed in information on his rifle.

Poor fired, taking his time and making calculated adjustments. The first 7 were close, but didn’t hit. Then, 14 seconds after firing his 8th shot, he hit his target

Unfortunately, though we have just about all the evidence we need with the short clip below, this record shot won’t be included in the Guinness Book of World Records. Shots taken with optics are not included.

But that doesn’t make it any less impressive.  Poor is anything but a poor shot and rifle is one fancy piece of equipment. Well done!

See all the action for yourself in the video below.