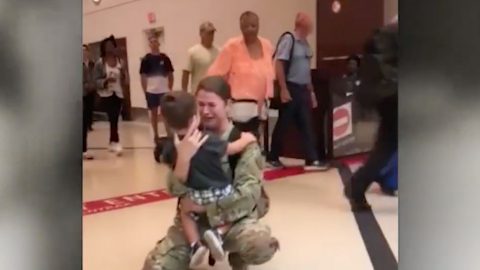 Being a parent is tough as anyone will tell you, but being a new parent and also an active member of the military is as tough as it gets. Especially if you’re a new mom.

Air Force Staff Sergeant Chelsey Speicher joined the United States Air Force when her son Jordan was just 2 years old. She was promptly deployed to Jordan where she was stationed for 6 months. Although that might not seem like a long time for some, 6 months of a 2 year olds life is a long period of time as they seem to grow and change on an almost daily basis.

Not to fall out of touch, Chelsey FaceTimed Jordan almost every other day to ease her own pain away from him and for him to remember her as well. Although it helped, she still wasn’t sure how he was going to react at the sight of her when she returned from deployment .

As it turns out, her worst fears were unwarranted. Jordan sprinted towards her as soon as he saw her, promptly grabbing her face in his hands. Hearing him say, “mommy” made Chelsey burst into tears and so did the rest of her family who were waiting for her in the back.

Welcome home Chelsey and thank you for your service.