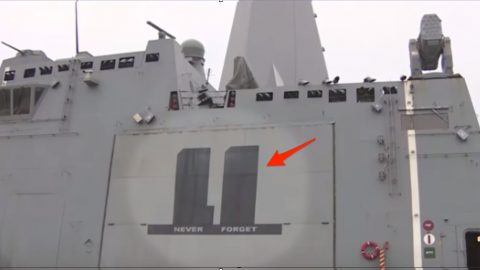 On March 1, 2008, the USS New York was christened as the fifth ship to bear the name of New York. But this ship is different – the San Antonio-class amphibious transport dock isn’t just named after New York – it is quite literally built from New York.

Salvaged from the wreckage of the World Trade Center after the devastation of 9/11, 7.5 tons of steel found new life as the USS New York’s bow stem and nose.

The entire ship is a living monument of sorts. Above the ramp in the well deck rests a commemorative steel plate. Another piece is displayed in a prime viewing area. A firefighter’s helmet, a first responder’s uniform, and many other small reminders exist in all corners of the ship.

Even the general attitude aboard the ship is one of reverence for those lost, especially as many crew members are from New York. It suits the ship’s motto perfectly:

The USS New York was deployed for the first time on June 10, 2012. One of its most notable deployments to date was when, in 2014, it was used to transport Ahmed Abu Khattala back to the United States. He was the suspected mastermind behind the 2012 Benghazi attack.

Usually the naming of ships after states is reserved for submarines, but we’re very glad that they made an exception for this marvelous commemorative surface ship. Today, many civilians can visit on tours, and the 9/11 victims and heroes are honored in the daily life of the ship.

Check out the video below to learn more about the symbolism aboard the USS New York.