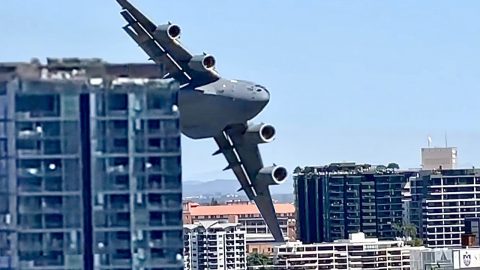 RAAF’s humongous C-17 Globemaster was a sight to behold as it maneuvered through the dense urban terrain of Brisbane. The incredibly low maneuver was part of its practice run for the “Riverfire Spectacular” – a fireworks show concluding the Brisbane Festival.

As part of the display, the military aircraft was expected to fly at very low altitudes down the Brisbane River at 300 ft. Typically, the festival featured fighter jets, so this was a surprising change for the residents.

This clip gives us an idea of how maneuverable the Globemaster III is despite its size – and how scary it is up close. Just take a quick look at Mark Greenmantle’s stunning photograph of the C-17 rearing its head out of a building.