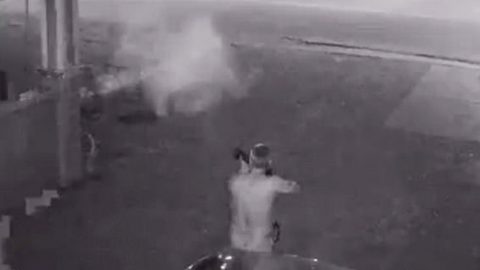 Police have just released footage of a gunman who terrorized a residential neighborhood in Evansville, Indiana. The gunman has been identified as 51-year-old Barry Freeman fired bullets into his neighborhood for the better part of an hour. The horrific episode ended with the police coming to the rescue resulting in the death of the gunman.

The incident began when Freeman started firing his gun killing his neighbor, Jeffrey Kempf. The Evansville Police Department was summoned to the scene of the attack and led into an ambush by the gunman resulting in a standoff that lasted over an hour. Barry Freeman was equipped with an AR-15 as well as a shotgun, blasting rounds at the officers and hitting the police vehicle.

Barry Freedman was shot by officers and died on the scene as a result of his injuries. Aside from the death of Jeffrey Kempf no others were killed in the incident. The Evansville Police Department has released film of the hourlong shootout via bodycam and neighborhood security monitors. Be warned there is graphic content within the recorded film.