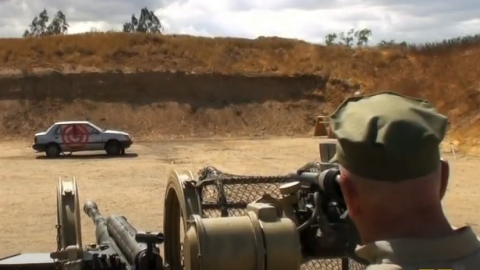 Actor and former U.S. Marine drill instructor R. Lee Ermey hosted the History Channel TV series Lock n’ Load with R. Lee Ermey which took a closer look at the development of different types of military weapons throughout the centuries. Although the show rated well, it ran for only one season after being canceled.

In one episode, he demonstrated the use of an anti-aircraft gun used during World War II.

Ermey is best known for his role as Gunnery Sergeant Hartman in Stanley Kubrick’s 1987 war film Full Metal Jacket and he served 11 years in the Marines. He passed away on April 15, 2018 at the age of 74.