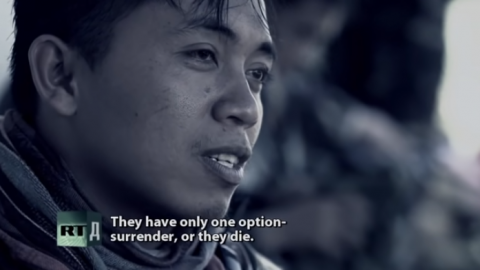 The Siege of Marawi was a wake-up call on the world-threatening might of the Islamic State.

This came in the aftermath of losing its stronghold in Mosul, where the world was pretty much convinced that has finally been defeated. But this setback proved to be just another one of Hydra’s head: The earlier declaration of a Caliphate caused numerous warring insurgents in the Philippines to pledge their allegiance to the Islamic State. The ISIS infiltration of Southeast Asia had finally been confirmed when Isnilon Hapilon – leader of the Abu Sayaff Group – was named the Emir of Islamic State East Asia.

And he was hell-bent on making the whole of Southeast Asia succumb to the supremacy of the Caliphate.

The most compelling on-the-ground footages, taken from the journalists who covered the siege and the soldiers themselves, were rolled into an excellent compilation depicting the raw violence that destroyed one of the most peaceful cities in the Philippines.

Yes, the Army was not without any flaws, especially regarding their botched tactics during the battle’s early days. But they more than made up for it with a sheer grit that’s honed by decades of suppressing insurgency and armed uprising.

It took five months to finally rid the city of Hapilon and his terrorists, yet the horrified looks of civilians featured in this video portends a long road towards healing and conciliation.