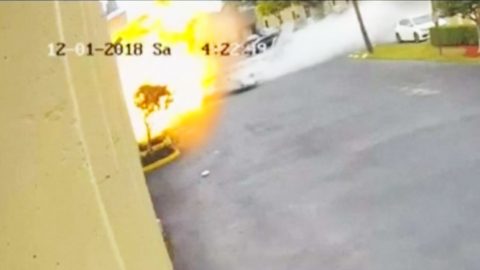 On December 1st, 2018, a small Cessna 335 aircraft leaving the Fort Lauderdale Airport crashed into a therapy center for autistic children soon after takeoff. The moment of impact was captured on a nearby CCTV camera of an electronics store.

Sadly, both people on board, the pilot and passenger, perished in the crash. A day later, the pilot was identified as Eladio Marquez, who according to the ATC declared an emergency right after takeoff.

A surveillance camera captured the moment a small plane crashed into a building in Fort Lauderdale. Children with autism were in the building and were rushed to safety. #planecrash #fortlauderdale #florida
FULL STORY:>>> https://t.co/n9yT2VSuCy pic.twitter.com/3MAhEHYsnW

The wife of the pilot, Belkis Marquez, told reporters her husband was an excellent pilot with a proven safety record. The crash left behind her and their children.

The center was filled with eight teachers and five children at the time of the crash according to the local fire department that arrived at the scene. They also stated one teacher sustained minor injuries but all the other teachers and students made it out of the building safely.

The NTSB (National Transportation Safety Board) is investigating the crash. We’ll update this article as new facts come to light.

HORRIFYING: Surveillance video shows the moment when a small plane crashes into a Florida school for children with autism. cbsloc.al/2DXRnSg