Spectacular A-10 Live Fire Action in the Desert 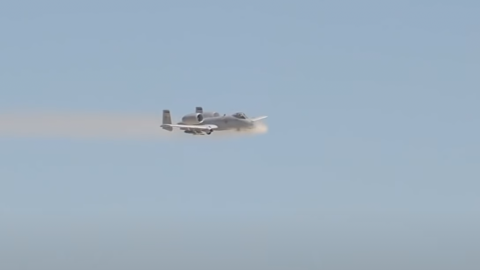 A-10 Over The Desert

We’re all trying to find excuses to watch another A-10 fire its Avenger and this video thankfully delivers. There’s just something irresistible about the A-10 and its specially-made Gatlin gun.

This A-10 is filmed while performing a live fire drill in the deserts of Nevada Test and Training Range back in August of 2013. As always, it fires its 30mm Avenger at decoy tanks on the ground. Farther into the video, the Warthog fired for approximately 5 seconds which is far longer than the usual 2-second bursts we usually hear.

In addition, it demonstrated a few more rocket passes over the rugged desert and it sounds as good as you think it is. Don’t miss out on this declassified video released by the Air Force. Check it out below!