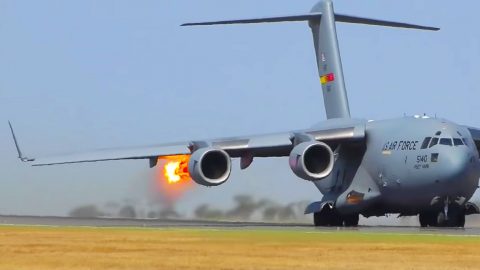 The Australian International Aerospace Airshow just concluded, spanning from March 1st to March 3rd. There were a lot of exciting moments during the show, some of the most technologically advanced aircraft in the world making appearances.

Some of the more notable military aircraft to make an appearance were the 4 F/A-18A Hornets, an F-22 Raptor, an F-35 Lightning II and cargo plane, C-17A Globemaster III. This is the subject of this post.

Unfortunately, spectators were not able to see this aircraft fly because of a slight burnout while it was about to take off. If you pay close attention to the right side of the screen, there are many birds flying in the grassy area next to the runway. The description of the video describes the Avalon Airport for being notorious for having hawks around, something this C-17 crew found out the hard way.

To be on the safe side, the aircraft crew aborted their takeoff to have maintenance check the engine. Although no report of damage was explicitly stated, the C-17 did not perform its scheduled flight the following day of the airshow.