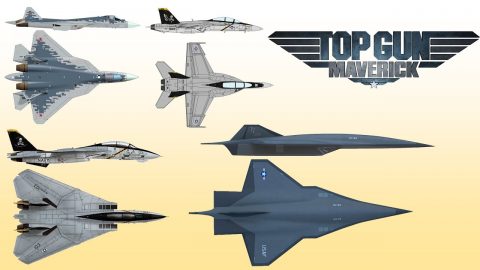 If you watch a movie centered around warbirds, you best believe it’s going to feature at least one of the classics. In Top Gun: Maverick, they featured Tom Cruise’s own P-51 Mustang. The Mustang alone is responsible for shooting down 4,950 German planes.

The second eldest warbird in the film is the F-14 Tomcat. This plane was Maverick’s most-used plane in the first film. It has been more than a decade since it was retired but it got its last hurrah in one of the scenes of the sequel.

Boeing’s F/A-18F Super Hornet also played a huge role in the film. This was the plane that Maverick was supposed to train the recruits in. In contrast, the Lockheed Martin F-35 had relatively short screen time but it definitely stole the scenes it was in. The F-35 is one of the most recently introduced US aircraft featured in the movie.

Aside from the F-35, the “Darkstar” jet also had its moments. This fictional jet is loosely based on the SR-71 and played a role in setting up the story. The sixth plane to be featured is the SU-57 Felon. This aptly-named warbird was used in the movie by the antagonists. The Felon is one of Russia’s most recent fighter aircraft, making its debut in 2020.