The Man Who Ended WWII Concealed An Agonizing Secret 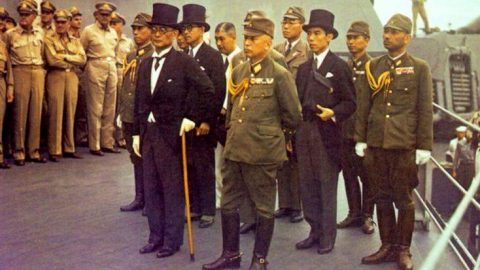 On September 2nd, 1945 the longest and bloodiest conflict in human history came to an end aboard the USS Missouri. Members of the press, the US Army, Navy, and General MacArthur were on hand to commemorate this occasion. A Japanese man holding a cane limped across the deck of the powerful battleship and signed a document, but who was he?

His name was Mamoru Shigemitsu, he served as the Foreign Minister of Japan and was never really a figure that comes to mind in WWII. He resolved conflicts peacefully between nations such as the United States and the Soviet Union. While spending time with Emperor Hirohito at his birthday party a Korean assassin hurled a bomb within a group of Japanese officials. As a result, he lost his right leg and walked with a limp for the rest of his days.

Mamoru Shigemitsu always voiced a strong objection to joining the war and as fate would have it, he would be the man to end it. Despite those protests against the war the Soviet Union insisted be put on trial for war crimes and he served a seven-year prison sentence. Following his time in prison, he continued a mission of peace and join the United Nations. He passed away in 1957 but will be the remembered as the man who solidified Japan’s surrender and ended WWII.

“[H]e was the ranking diplomat at the United Nations where he represented Japan in its application for membership. But the second reason he’ll be remembered is that he was the little man in a top hat and glasses, walking with a limp, resting on a cane, who boarded the USS Missouri 2 September 1945 and signed the Japanese surrender. And that’s probably something he could tell the grandchildren about.”