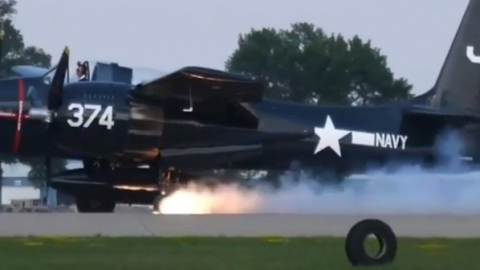 We found a video recently of a Tigercat losing its wheel after exploding and goes rolling down the runway. The Tigercat came little bit too late to see actual combat in WWII, but saw some service in the Korean war. the tiger cats wingspan was 51 1/2 feet in 16 feet tall. its empty weight was 16,270 pounds, with a max takeoff weight of 25,720 pounds. It was powered by two Pratt and Whitney R-2800-34W Double Wasp 18 cylinder air cooled radial piston engines at 2100 horsepower. it had a maximum speed of 460 mph and a 1200 mile range as well as a service ceiling of 40,400 feet. it was armed with 4 20 millimeter cannons, and four 50 caliber M2 browning machine guns.