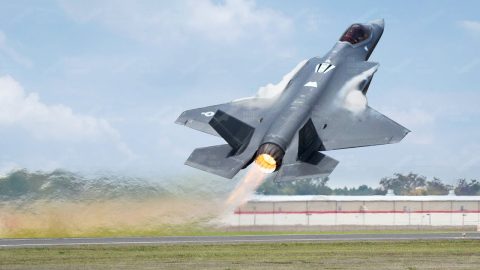 The F-35A is the US Air Force’s conventional takeoff and landing version of the Lightning II. It is the smallest and lightest version of the three main variants yet is capable of 9 G’s.

At the two-minute mark in the video, we can see the F-35A perform a vertical climb while utilizing its afterburner. The Lightning II’s Pratt & Whitney F-135 turbofan engine can produce 43,000 lbs of thrust while using its afterburner, giving it an estimated rate of climb of up to 50,000ft per minute.

Regardless of the afterburner, the F-35 can still reach Super Cruise speeds. Its speed, maneuverability, and stealth capabilities will enable the F-35 to become America’s future fighter to achieve air dominance.