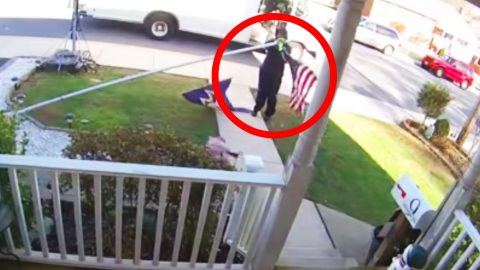 A recent viral video, provided below, is what this country is made of. With almost 30 million views at the time of this writing, (all within just four days), this video shows what a former Marine turned FedEx driver did. Seeing a flagpost blown over due to strong winds, he picked up the flag that was on the ground as a result and started folding it.

AMERICAN RESPECT: A U.S. Marine that now drives a FedEx truck stopped and took the time to fold an American flag after winds knocked it over outside a Maryland home.

As we all know, having an American flag on the ground is not only frowned upon but also completely disrespectful. This feeling is even more exasperated when you’re a Marine, so there was only one thing he could do. Pick it up and fold it in 13 sections as he was trained.

Although he did this for himself and to pay respects to his country and brothers-in-arms, he had no idea there was a security camera on the porch of the house he didn’t even have a delivery for. He simply saw it and stopped in his tracks to do the right thing.

The camera captured his entire process and after reviewing the footage, the homeowner posted it on their Facebook page. Four days later, it was headlining all major media outlets reaching millions of people.

Here’s what some people on Facebook had to say about what he did:

In the spirit of this Marine, we decided to show you a tutorial of how to properly fold a flag yourself. You might not use it, but it will come in handy when you do.