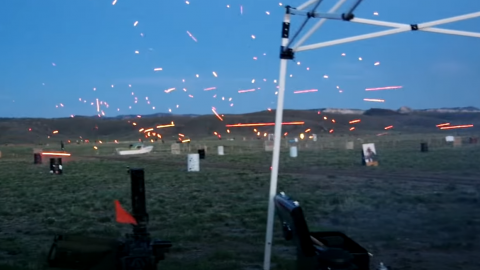 First of all, this is not a scene from Star Wars event though it very much looks like so.

In 2015, machine gun lovers gathered in Casper, Wyoming for the annual Machine Gun and Cannon Shoot. For what’s dubbed as the “Mad Minute”, shooters would load their guns with tracer rounds and fire away thereby alighting the shooting range with something that looks like thousands of tracing streaks.

Though it’s rather brief, it’s still mesmerizing to watch. Tracer rounds are visible to the naked eye during daytime but they’re a whole lot brighter at night thanks to their pyrotechnic composition.