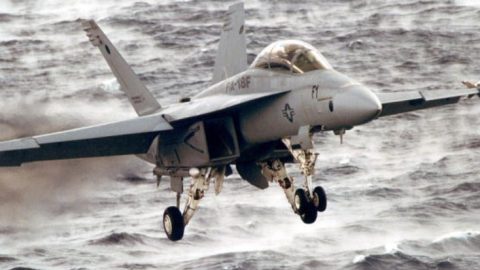 New has broken that two United States Marine Corps aircraft were involved in a collision of the coast of Japan. Fortunately, of the people involved was successfully rescued by the Japanese Maritime Self-Defense Force. Marine Corps officials have revealed that the aircraft involved in the crash was an F/A-18 Hornet and a KC-130.

The two aircraft were conducting routine training activities about 200 miles off the coast of the Marine Corps Air Station Iwakuni when the incident took place. Sadly, there are six marines involved in the crash that still remain unaccounted for.

“The aircraft involved in the mishap had launched from Marine Corps Air Station Iwakuni and were conducting regularly scheduled training when the mishap occurred.”

The Japanese Maritime Self-Defense Force continues the search for the missing crewmen. Authorities are launching an investigation into the cause of the crash, although details are scarce at this time. Wochit news provides a video with some details of the current search efforts off the coast of Japan.