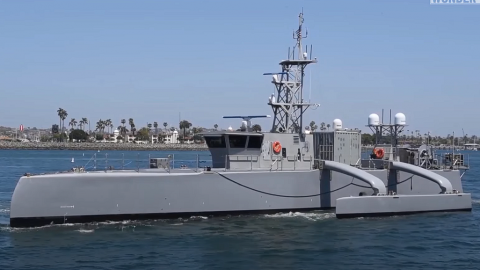 Even though its full load displacement comes at around 145 tons, the Sea Hunter can reach 27 knots and travel up to 10,000 nautical miles. It carries 40 tons of fuel, enough to last it for 70 days.

It has a tethered parafoil kite towed behind the ship that carries 150 lbs of payload to 1,500 ft above sea level. TALONS carry radar and radio-relay systems to extend communication range.

The vessel can operate without a person using a joystick the whole time. It combines radar and optical guidance to avoid hitting any obstacles.

Sea Hunters can be deployed in dangerous waters. The absence of a physical crew makes it the superior choice during resupply runs in the middle of combat.

Unlike Destroyers, the Sea Hunter is relatively cheap to maintain. It costs between $15,000 to $20,000 to operate the unmanned ship daily. Meanwhile, a Destroyer costs about $700,000.