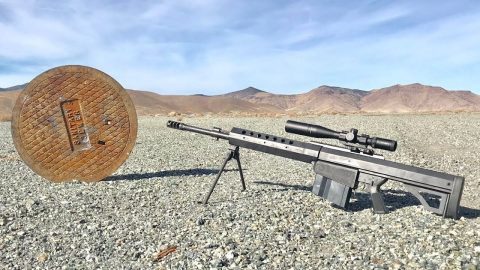 While perusing the internet, we stumbled upon a really great YouTube channel which is dedicated to weapons and shooting some bizarre stuff. Naturally, we were intrigued.

Edwin Sarkissian, the guy in the video and the name of his channel, gets his hands on everything from exotic handguns to massive sniper rifles. Then, he thinks of some fun things to shoot at like, cars, kevlar, rocks, and even other bullets to see what results he can get.

A typical sewer cap you see around your town weighs over 100 pounds.

In this episode, a sewer cap in the center of attention. Most sewer caps, or manhole covers as they’re typically called, are made out of cast iron, so it’s actually really neat to see what bullets will do to such a thick, resilient object.

As for the weapons of choice, this guy puts the cover through the wringer. He shoots it with a P22 pistol, Desert Eagle, AR-15, and some other great weapons. Finally, he finishes it off with a 50 Cal BMG rifle.

See what that does below.