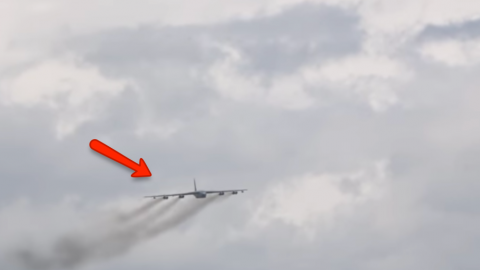 The RAF Cosford Airshow returned with a bang featuring aircraft of all shapes and sizes joining in on the fun. Fighter jets, bombers, Cold War jets, vintage aircraft, custom planes and everything in between. But then just when everyone thought they had seen it all, the big guy showed up, the B-52H Stratofortress.

Hailing from Barksdale Air Force Base in Louisiana this B-52H is part of the 96th Bomb Squadron better know as the Red Devils. This big guy was in the area conducting military exercises and got to join in on the fun at the airshow. Just because the B-52 is pushing 60 years doesn’t make it any less capable of bombing the hell out of its enemies.

The audience at the Cosford Airshow got an unexpected surprise when it came down low and fast during a flyby. People who witnessed it should consider themselves lucky that they didn’t lose their hearing at how loud it was. You can watch it here in this clip, just be careful with your volume levels because it gets pretty loud.