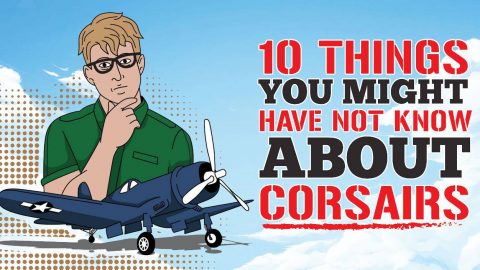 Got Anything Else To Add?

10. Corsairs Shot Down Other Corsairs In July 1969, a week-long war erupted between Honduras and El Salvador which was later dubbed the Football War (also known as Soccer War or 100 Hour War). The root cause was mostly economic in nature touching on immigration issues and land reform. It’s not exactly sports-related despite its name. The tension and conflict went way deeper than a simple ball game rivalry although there was already a buildup when some fans started fighting during the 1970 FIFA World Cup Qualifier. After the play-off match on June 26, El Salvador cut their diplomatic ties with Honduras. And so, on the afternoon of July 14, 1969, military from El Salvador launched an attack against Honduras. Some of their air-raid targets included the Toncontin International Airport. Both countries faced off in the air using Corsairs which they purchased after World War II from Allied countries. Another interesting fact is that this became the last propeller-driven air battle in the world. This Warbird Had A Lot Of Nicknames.

One of the most famous nicknames these warbirds are known as is the Whistling Death, as they scream when they dive. However, pilots also called them the U Bird, The Hog, The Bent-Wing Bird, Sweetheart of Okinawa and The Ensign Eliminator (because compared to other Navy carrier-borne aircraft, the Corsair required way more flight training hours).We prefer the Whistling Death though because it sounds so bad ass. It had a reputation for being able to out-climb, out-run and out-fight its opponents. It also had a distinctive and innovative ‘bent-wing’ design which made it easily recognizable. However, apart from that, it earned its moniker because of the peculiar whistling sound people heard when flying at a higher airspeed. It was mostly caused by the air running through the slots located in the wings’ inboard leading edges.  With its exceptional performance during World War II, the name they gave it is well-deserved.

8. The Propeller Is Absolutely Massive Major Props For This Design.

To get as much power out of their massive Pratt & Whitney R-2800 engines (18 cylinder, air-cooled, radial), the Corsairs needed a bigger propeller. Basically, the huge engine sort of influenced the majority of the design. This addition required for their noses to be raised resulting in the need for longer landing gear. This made the landing gear weaker and not appropriate for carrier landings (hence the nickname ‘Hog Nose’). Pilots also found it difficult to see the front of the aircraft during takeoff. The inverted gull wing design allowed for the gears to remain short and sturdy while still making space for the massive propeller. It’s actually one of the things you notice the first time you look at this bird. The propeller looks outsized as if somebody just grabbed mismatched parts to create the Corsair. It didn’t look as beautiful and sleek as other warplanes. Nonetheless, its reputation is well-deserved.

7. Had The Biggest Engine At One Point Radials At Their Finest.

Corsairs were designed with the 2,000 horsepower or 1,500 kW Pratt & Whitney R-2800 (B series) air-cooled, Double Wasp radial engine in mind, which was the biggest engine at the time of production. It wasn’t easy to fire up especially if it had to sit in subfreezing temperature overnight. To pull up on a prop blade, it needed at least two men. To accommodate it, Corsairs were designed with a much longer nose than pilots have seen before and created some invisibility problems. Something had to absorb all that power which is why they decided on the use of 4.06m Hamilton Standard Hydromatic three-blade propeller. As mentioned earlier, that pretty much dictated majority of the overall design. All the adjustments and modifications paid off as the Corsair’s stellar performance was way superior when compared to its opponents and contemporaries. However, it wasn’t an easy aircraft to maintain especially because some regarded the warplane as ‘over-engineered.’

6. A Whole TV Show Was Created About The Iconic Plane (Squadron) Pappy Was The Man!

The period military T.V. show Baa Baa Black Sheep, later called Black Sheep Squadron, was a series that aired from 1976 to 1978. It was a show based loosely on a real World War II squadron by the same nickname that fought in the Pacific Theater. Most notably, it emulated US Major Greg “Pappy” Boyington (played by Robert Conrad who received a Golden Globes nomination for Best Actor in a Television Series) – a great pilot, war hero and quite a character to be around. The real Greg “Pappy” Boyington helped in the series and even had a cameo role. His Attack Squadron VMF-214 was also featured which, in World War 2, was the most popular Marine Corps fighter squadron based in the Solomon Islands. The FG-1 Corsair fighter planes were leased by private owners to Universal Studios. This was written in the opening credits: “In World War II, Marine Corps Major Greg ‘Pappy’ Boyington commanded a squadron of fighter pilots. They were a collection of misfits and screwballs who became the terrors of the South Pacific. They were known as the Black Sheep.”

5. 2 Of The Most Iconic Pilots Of WWII Era Are Associated With Corsairs What I Wouldn’t Give To Meet These Two Guys.

As mentioned above, Greg “Pappy” Boyington (pictured above) was a hell of a Corsair pilot who fought in the Pacific Theater and became a United States Marine Corps fighter ace. He was a recipient of the Medal of Honor and the Navy Cross. Initially, he used the P-40 Warhawk and was part of the ‘Flying Tigers.’ It was in early 1943 when he flew combat missions in the South Pacific with his F4U Corsair. In September of that year, he commanded the ‘Black Sheep’ fighter squadron. Additionally, US Army Air Corps Reserve officer Charles Lindbergh, who was famous for his Orteig Prize-winning solo non-stop flight from New York to Paris (the distance from Roosevelt Field to Le Bourget Field was roughly 5,800 km and the flight took 33 ½ hours), was the man responsible for the many design modifications that improved the Corsairs into the fighters they became. He was also awarded the Medal of Honor. Almost an instant success, Chance Vought, which designed and produced the Corsair, was overwhelmed with production orders and had to outsource the work. The demand was becoming too much for their manufacturing capability. Goodyear Aircraft Company built Corsairs were designated FG (land-based version and some of which had fixed wings and were unable to fold). The British FG had clipped wings too. Other Goodyear variants included FG-1E which featured radar equipment. They produced models identical to the ones by Vought. On the other hand, Brewster Aeronautical Corporation built Corsairs which were marked F3A. They only managed to build just over 700 aircraft because they were eventually forced out of business and none of them ever made it to the frontline. It was mostly due to a combination of inefficient quality control and poor overall production techniques. Internal management problems caused the cease of production in 1944. Corsairs built by Chance Vought were the original F4Us.

3. Designed For The Navy, But Used Mostly By The Marine Corps They Kicked Butt Back Then, And They Kick Butt Now.

Chance Vought designed Corsairs specifically for the United States Navy, but their design did not initially pass carrier landing qualifications. The difficult and problematic performance was deemed unsuitable for their use. Also, add in the fact that the Hellcat showed great success, the Corsairs were then transferred to the Marine Corps (which didn’t have any requirement in terms of carrier landings) for land-based use where they performed tremendously well and eventually became legends. The landing issues were solved later in the war (which propelled the Corsair to become the most capable carrier-based fighter-bomber in the war), but just a limited amount of those variants were produced. Although the Corsair still served in the US Navy later on, albeit to a lesser degree, it still boasted an 11:1 kill ratio. Also, it was widely regarded by Japanese pilots as the most formidable fighter plane from the US during the World War 2.

2. Corsairs Fought In More Than One War Now That Makes Them Even More Badass Than Ever.

Chance Vought introduced the Corsair in the middle of World War II in 1942. Earning an impressive 11:1 kill ratio, these warbirds remained competitive for quite some time. They were still used in the Korean War by the U.S. (where it mostly performed close support roles). Early in the war, Corsairs faced the Yakolev Yak-9 during dogfights but that was before the Mikoyan-Gurevich MiG-15 was introduced which outmatched the Corsair. There were Corsairs tasked to attack trains and truck convoys. Some were later transferred to France. There, they flew missions during the First Indochina War (the Corsairs were used during the second half where they flew a total of 959 combat sorties or around 1,335 flight hours in their three months of operation), the Suez Crisis, the Algerian War and the Football War, which was a conflict between Honduras and El Salvador. The last Corsair was retired from service in 1979 in Honduras.

1.There Were A Total Of 10 Super Corsairs Manufactured Super Corsairs, designated F2G, were built by Goodyear in 1945 with its first flight on July 15th of the same year. They were powered by an even larger Pratt & Whitney R -4360 28-cylinder four-row air-cooled, radial engine which produced 3,000 horsepower and had a remarkable 50% increase in its takeoff power. It was a special low altitude version which included an all-around vision bubble-type canopy. Another feature was a greater internal fuel capacity. After testing, however, F8F Bearcats were introduced and their performance was performance making further development of the Corsair redundant. In addition, there was insufficient speed and an obvious deficiency in the lateral control of the Super Corsair. There are only two Super Corsairs and only one that’s airworthy left as of this writing and has been often used for air racing by Bob Odegaard during the Reno Air Races (2006-2008) and it’s also on loan to the Fargo Air Museum in North Dakota. The other one is on display at the at the Museum of Flight in Washington.