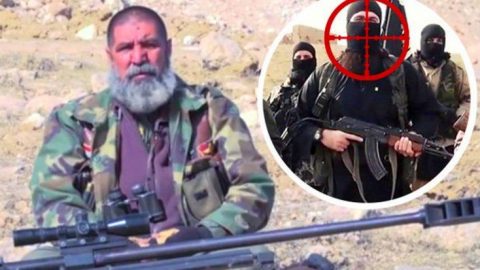 Some people say age ain’t nothing but a number and at 63 Abu Tahseen proves that you’re never too old to be a badass. He’s proud of his age and even more proud of his kill score which has totaled more than 300 dead ISIS militants in the past two years.

Tahseen was trained to be a sniper by the Russian Military and has fought in five wars during his lifetime including the Yom Kippur War, the Iran-Iraq War and the invasion of Kuwait and the Gulf War. When ISIS fighters invaded his homeland he returned to sniping them off one by one to liberate Iraq from their onslaught of terror.

The skilled marksman aims his powerful sniper rifle from on top of the mountains in a precise manner. He fires off a single shot with his decades of experience showing that the militants are easy pickings. ISIS fighters don’t come anywhere near his mountain because he brings terror to the terrorists. Abu Tahseen has gunned down over 300 ISIS members in the past two years and shows no signs of slowing down.

Abu Tahseen has gunned down over 300 ISIS members in the past two years and shows no signs of slowing down. See this veteran sniper take down unsuspecting ISIS targets in this clip, he is a master of death.