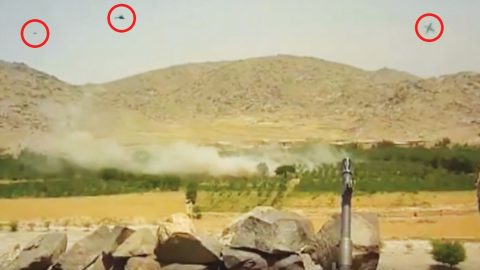 When you’re in the $#*!, there’s nothing better than the familiar sound of one of your CAS angels. When you’ve been fighting and trying to penetrate through an open field like in this case, getting exposed is the last thing you want to do. So…you call your friend for some support but in this case, the whole gang showed up.

The description of this video revealed that this footage was taken sometime in 2013 in Afghanistan. It also pointed out that it was a clip that might be used in a documentary which will use real combat footage to give it a real, raw feeling. Well, we hope they chose this one.

Although we’re not sure if that’s what they’re referring to, it might seem that the documentary they’re talking about is Korengal. A sequel to the Restrepo which won best documentary at the Sundance Film Festival in 2010, both of these documentaries are gripping. If you haven’t seen them, we urge you to do so.

As for this footage, it depicts CAS at it’s finest. Not only did an A-10 strafe the crap out of some Taliban, an AH-64 Apache and an OH-58 Kiowa came in to clean up with rockets. Check it out to see how it’s done.